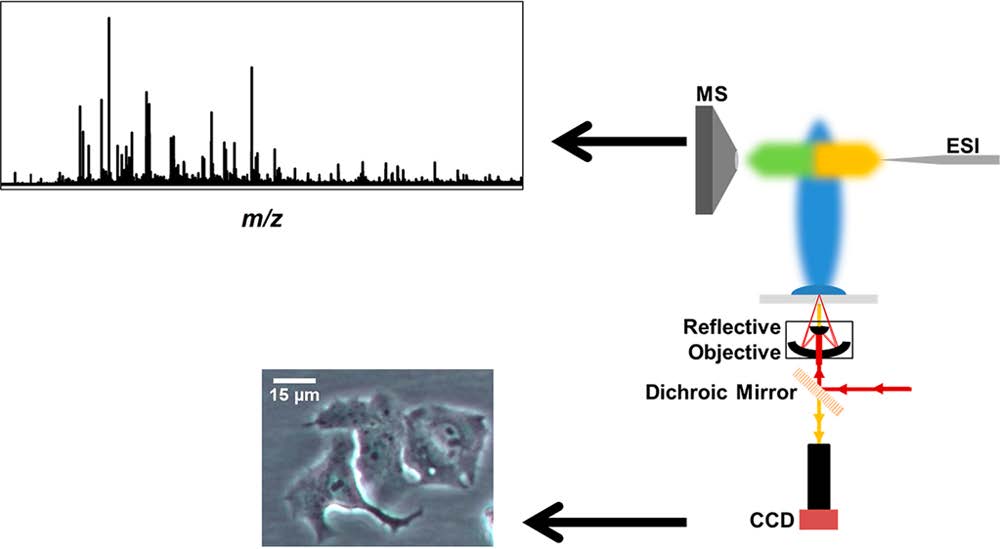 Most cultured cells used for biomedical research are cultured adherently, and the requisite detachment prior to biochemical analysis might induce chemical changes. This is especially crucial if accurate metabolic measurements are desired, given the rapid turnover of metabolites in living organisms. There are only a few methods available for the nontargeted in situ analysis of small adherent cell populations. Here we show that laser ablation electrospray ionization (LAESI) mass spectrometry (MS) can be used to analyze adherent cells directly, while still attached to the culture surface. To reduce the size of the analyzed cell population, the spot size constraints of conventional focusing in reflection geometry (rg) LAESI had to be eliminated. By introducing transmission geometry (tg) LAESI and incorporating an objective with a high numerical aperture, spot sizes of 10–20 μm were readily achieved. As few as five adherent cells could be specifically selected for analysis in their culturing environment. The importance of in situ analysis was highlighted by comparing the metabolite composition of adherent versus suspended cells. For example, we observed that cells analyzed adherently yielded higher values for the adenylate energy charge (0.90 ± 0.09 for adherent cells vs 0.09 ± 0.03 for suspended cells). Additionally, due to the smaller focal spot size, tg-LAESI enabled the analysis of ∼20 times smaller cell populations compared to rg-LAESI.